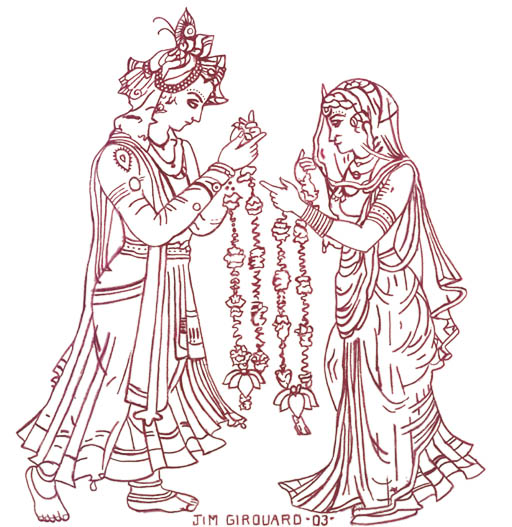 When I was living in the Hare Krishna temple in Boston Mass., there was a devotee there by the spiritual name Saranagati who had some photos of her trip to India from a year before that were undeveloped. After we got together and had them developed, one of the photos stood out among the rest and caught my attention completely. It was a photo of a large banyan tree with a white stone plaque with an etching of Lord Krishna and his wife Radharani exchanging flower garlands on their wedding day. This wedding ceremony took place 5000 years ago in a small remote village in India near the most sacred of all places in India, Vrindavan. Ordinarily, Hare Krishna devotees will visit Vrindavan and not Bhandirvan, although the story of the weeding in Bhandirvan is quite well known and popular amongst the devotees. Saranagati and her friends decided to take an adventure and asked around about how to obtain assistance to go there.. The only option was to ride on the back of a small wooden cart that was being pulled by a camel across roads that were extremely bumpy and difficult to tolerate. Upon arrival, they soon realized that the inconvenience of the trip was well worth the effort to go there. Bhandirvan is a beautifully preserved spiritual mecca almost unchanged in every way for thousands of years. The richness and color and atmosphere can be seen here in these few photos. The history and legend of Bhandirvan and the wedding of Lord Krishna and His wife Radharani has been equally preserved in a traditional way throughout India and its residents.

By divine arrangement, it turned out that the young girl was actually Radharani, Krishna's eternal and beloved wife.

They manifested their child-like forms into adult forms in order to declare their eternal love for each other through a marriage ceremony under the banyan tree.

Seeing this auspicious reunion of Radharani and Krishna, Lord Brahma appeared on the scene and performed the wedding ceremony. When the ceremony was finished, demigods from the heavenly planets rejoiced in jubilation and showered the newlyweds with flower petals.

When I saw the photo of the etching on the plaque of Bhandirvan, I immediately told Saranagati that I would sketch the etching image and put it on a t-shirt. This t-shirt is the only one like it in the world and is made from a silk-screen process and the image does not fade and will last for years.

This is a true story that captures a traditional history, spiritual history, beauty, and a wonderful friendship that developed between two Hare Krishna devotees in Boston in the year 2003. 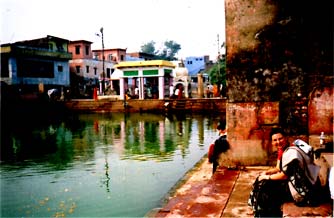 Back to Jim's Gallery